On Lesvos island, INTERSOS has been present since September 2020, when an emergency team was deployed after Moria’s camp fire to assess the most urgent needs of the affected population and to set up an efficient crisis response.

Currently, INTERSOS MHPSS intervention targets women who belong to vulnerable groups presenting signs of psychological distress, who have survived gender-based violence and/or are the sole or primary caregivers of a dependent family member.

The MHPSS INTERSOS Team, composed of psychologists, Case Managers and Protection Officers ensure that the mental health programme adheres to a holistic and rights-based approach. The aim of the intervention, in the context of full case management support, is to provide comprehensive psychosocial care to the persons, through individual and group sessions along with high-quality referrals of the beneficiaries to other services and support. 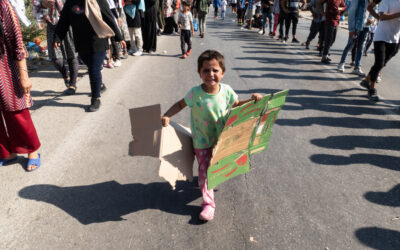 One year since Moria’s fire… A dark anniversary

1 year after Moria’s fire. Exactly one year ago, a fire destroyed the Moria camp on the Greek island of Lesbos. On that occasion, the Greek and European authorities had promised that reception conditions would be improved. EU Commissioner for Home Affairs Ylva...

Moments from the work of Intersos in Lesvos

On the island of Lesvos (#Lesvos), #INTERSOS continues its dynamic, consistent and human-focused mission that began in September 2020 after the emergency situation that many beneficiaries of international protection experienced after the catastrophic fires in Moria....